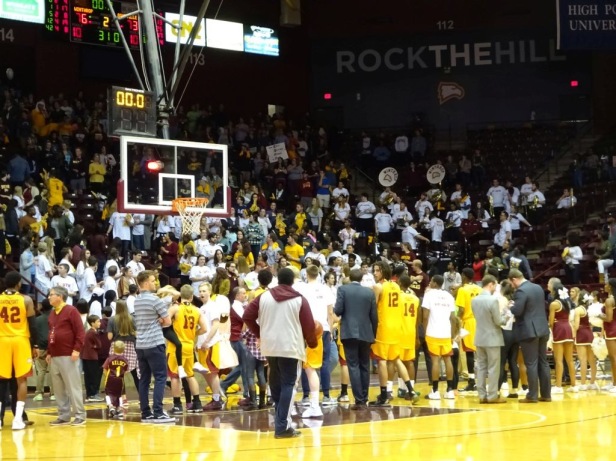 ROCK HILL, S.C. — It was billed as a heavyweight fight in Winthrop Coliseum Thursday night, a battle of the Big South’s top two teams.Winthrop punched. Asheville countered. Both teams hit the mat. The homestanding Eagles, though, landed the final blow, defeating the visiting Bulldogs, 76–73, before a spirited crowd of 3,215 fans in a nationally-televised tilt.

“That was a good college basketball game,” said Asheville coach Nick McDevitt in his remarks to the media. “Both teams saw themselves down eight, 10, 12 points, and just kept playing. I like the fact that the folks watching nationally got to see two teams get after it.”

Asheville (13–7, 5–2 Big South) controlled much of the opening twenty minutes, getting a combined 25 points from juniors Ahmad Thomas and Raekwon Miller to take a 41–36 lead to the halftime break. McDevitt’s club saw one of those advantages he described, as a 30–28 Asheville lead ballooned to 11 on the strength of a 9–0 Bulldog run over a 1:44 span. Winthrop (14–4, 6–1) quickly returned serve to secure the interval margin.
The visitors jumped back out to another double-digit lead as the half began. Winthrop got a three-point play from Xavier Cooks to knife the advantage back to single digits, then Asheville countered with a MaCio Teague jumper to extend the lead to nine at the 17:05 mark.

That Teague basket proved to be the only field goal the Bulldogs could secure for 11-plus minutes of game time, as the Eagle defense stiffened and held the productive Asheville offense at bay.

“In my core, in my DNA, I’m a defensive guy, so that makes me happy,” stated Kelsey. “That fires me up as much as a 102-point game when we make 18 threes. Asheville’s a very, very good defensive team. Very good. But, you know what? So are we.”

That defensive firepower was only truly countered by Asheville’s prowess at the free throw line. After Winthrop built an eight-point advantage at the seven-minute mark, Asheville went on a 13–0 burst to take a five-point lead, with seven of those points coming from the line in just over two minutes. McDevitt opined that the free throws may have actually held back his club.
“We were able to get to the free throw line a little bit, obviously shooting a good percentage there in the second half, 19-for-25,” stated McDevitt. “We were doing it a little bit to the detriment of running offense. At times, I thought some of our offensive possessions, it looked like the intent was to get fouled, not to run offense and take what the defense gives you. We just weren’t getting enough ball movement in the second half.”

Despite those struggles — the Bulldogs were 6-for-22 from the field in the second half — they still held a three-point lead at the final media timeout, before Winthrop went on an 11–3 run to close the game. Kelsey remarked on the mood during that final timeout, and what led to the burst.

“When we were in that huddle, our daubers were down. We really lost our discipline,” said Kelsey. “I’m looking at them, (and) I’m like, ‘fellas, we’re down three, and Keon (Johnson)’s on the line (after the timeout). He hasn’t missed a free throw since junior high. He’s gonna make these, and we’re gonna be down one. It’s a one-possession game. Pick your head up.’ They got in their own little huddle and got after each other, and came out of it and got stops.”

Even after that run, the game came down to one frantic final Asheville possession. The Bulldogs’ MaCio Teague took one final three-point shot that would not fall, and the Eagles secured the ball as the horn sounded.

“It (the shot) looked good. It’s not what we were trying to do. I thought there was enough time for us to try to get to the rim and extend the game a little bit, try to get a quick two, perhaps foul again,” said McDevitt. “Still, we had the opportunity for two or three more possessions in that game.”

The aforementioned crowd made a clear difference, as well. On a night heavily promoted by nearly everyone associated with Winthrop and the ESPNU cameras intently focused on the Coliseum, multiple sections filled with students — Kelsey estimated 1,200 of them — and were loud from open to close.

“The turnout tonight was — I was speechless. I had goose bumps on my arm. It felt like an elite, high-level college basketball game tonight,” said a visibly excited Kelsey. “A ton of people poured their heart and soul into trying to get a great atmosphere at a really late game, and it was unbelievable. I just looked up there, and all those sections were full of students, and they were into the game, and it was loud. […] The crowd was just awesome. Awesome.”

“Again, that baseline…that was a wall of students, and they were loud and ready to go,” added McDevitt. “Congratulations to Winthrop, and not just the team, but it’s a good showing on national television for the town, for the university, for the athletic department, and the Big South.”

Thomas led the Bulldogs and all scorers with 27 points on 10-for-20 shooting. Teague added 15 and Miller 13 for Asheville. Winthrop’s Xavier Cooks continued his recent success in recording double-doubles, scoring 19 points and hauling in 13 boards in 34 minutes. Rod Perkins tallied 17, while Anders Broman scored 12.

Asheville returns home Saturday to face Campbell in a Big South conference tilt. That game is scheduled for a 4:30 (Eastern) tip in Kimmel Arena. Winthrop travels to Lynchburg, Va. to face fellow first-place team Liberty. That game is slated to begin at 7:00 Saturday night.