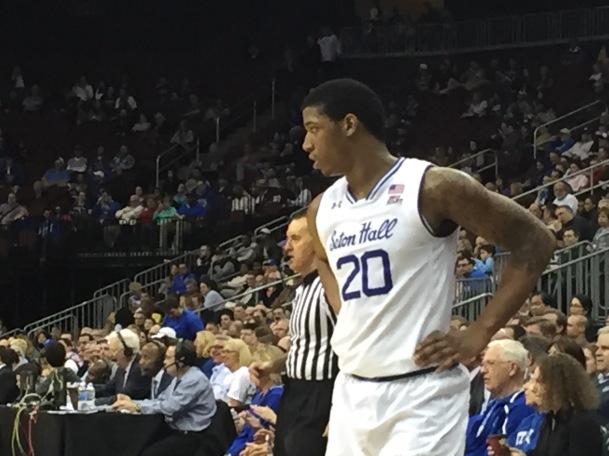 Newark, NJ- We sat with Desi Rodriguez after his 27 points led Seton Hall to a hard fought win over Georgetown on Tuesday evening. Rodriguez, a junior, notched his 1,000th career point last week and has had a breakout season in 2016-17. His Pirates look to get their second consecutive NCAA berth and finish the regular season on Saturday against Butler.

CollegeHoopsDigest: How big was getting fouled on a three pointer with 1:53 left in the game to give your team a chance to tie the score?

Rodriguez: It was very big. I wanted to measure him up. I knew he was going to contest my shot. I followed through with my arm a little bit and he hit me. I made 2 out of 3, I wish I would’ve made 3 out of 3 but we got a stop on the other end and we got a score. I’m proud of my guys and proud that we pulled through today.

CollegeHoopsDigest: Did you feel any kind of panic down the stretch? Your season and your postseason were on the line, what did you say to each other in the huddle?

Rodriguez: We always have confidence but we kind of panicked towards the end when we were down five late in the game.We just had to figure out how to win. This was an important win and we were willing to do whatever in order to get the win tonight. I’m proud of our guys.

CollegeHoopsDigest: What do you say to Myles Powell, your sharpshooter who had an off night tonight?

CollegeHoopsDigest: How much is last year’s run to a Big East Championship serve as an inspiration to the team this season? Will you be watching highlights of it to get ready for this years Big East Tournament?

Rodriguez: I’ll definitely tell Coach Willard to show some highlights from last year especially to the new people to show them what it takes to win. I’ll tell them not to be nervous, go in there and play.  We’ve seen all these teams before so there’s nothing to be nervous about. The Big East Tournament is about who wants it more and I’m going to help my guys prepare anyway I can.

CollegeHoopsDigest: How big would it be if Seton Hall could go into Hinkle Fieldhouse on Saturday and steal a win against Butler on their senior day?

Rodriguez: My whole college career Butler is by far the toughest team that we play against. They get down and gritty and we have to get every 50/50 ball in order to win. That’s going to be a great game, we’re going to play the best game we can and hopefully get a win.

CollegeHoopsDigest: Seriously though, senior day at Butler. How sweet would a win be?

Rodriguez: (Laughs) Man, it’s going to be hard. I hope so.

This was the last image I saw this season. Pretty perfect way to end the year. (Brian Wilmer/College Hoops Digest)